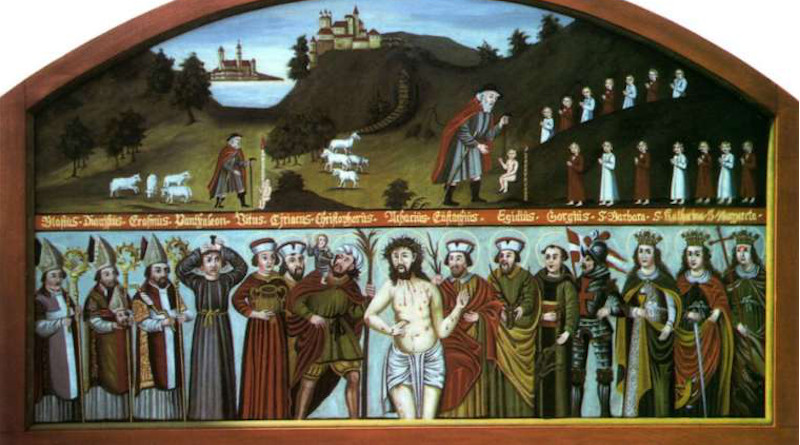 While the COVID-19 pandemic has turned life upside down for many people in 2020, it’s not the first time the Church has gone through a major health crisis.

In the middle of the 14th century, the plague – also called “The Black Death” – also also called “The Greatest Catastrophe Ever” – ravaged Europe, killing 50 million people, or about 60% of the population (a vastly higher death rate than coronavirus), within a few years.

Lacking the advances of modern medicine today, and layering dead bodies in pits like “lasagne with layers of pasta and cheese,” the people had no choice but to cling to their faith.

It was at this time that the Fourteen Holy Helpers – Catholics saints, all but one of whom were early martyrs – came to be invoked by Catholics against the plague and other misfortunes.

According to New Liturgical Movement, devotion to these 14 saints started in Germany at the time of the plague, and they were called “Nothelfer,” which in German means “helpers in need.”

As bouts of the plague resurfaced over the decades, devotion to the Holy Helpers spread to other countries, and eventually Nicholas V declared that devotion to the saints came with special indulgences.

According to New Liturgical Movement, this introduction to the feast of the Holy Helpers (celebrated Aug. 8 in some places) can be found in the Cracow Missal of 1483:

“The Mass of the Fourteen Holy Helpers, approved by Pope Nicholas…it is powerful on their behalf, however so much one is in great illness or anguish or sadness, or in whatsoever tribulation a man shall be. It is powerful also on behalf of the imprisoned and detained, on behalf of merchants and pilgrims, for those that have been sentenced to die, for those who are at war, for women who are struggling in childbirth, or with a miscarriage, and for (the forgiveness of) sins, and for the dead.”

The collect for their feast in the Missal of Bamberg reads: “Almighty and merciful God, who didst adorn Thy Saints George, Blase, Erasmus, Pantaleon, Vitus, Christopher, Denis, Cyriacus, Acacius, Eustace, Giles, Margaret, Barbara and Catherine with special privileges above all others, so that all who in their necessities implore their help, according to the grace of Thy promise, may attain the salutary effect of their pleading, grant to us, we beseech Thee, forgiveness of our sins, and with their merits interceding, deliver us from all adversities, and kindly hear our prayers.”

Here’s a bit about each of the Fourteen Holy Helpers:

Saint George: While little is known definitively about his life, St. George was a fourth-century martyr under the persecution of the emperor Diocletian. A soldier in Diocletian’s army, St. George refused to arrest Christians and offer sacrifices to Roman gods. Despite bribes from Diocletian to change his mind, St. George refused the order and was tortured and eventually executed for his offenses. He is invoked against skin diseases and palsy.

St. Blase: Another 4th-century martyr, St. Blase’s death is very similar to that of St. George. A bishop in Armenia during a time of Christian persecution, St. Blase was eventually forced to flee to the forest to avoid death. One day a group of hunters found St. Blase, arrested him and brought him back to the authorities. At some point after his arrest, a mother with a son who had gotten a fishbone perilously stuck in his throat visited St. Blase, and at his blessing, the bone dislodged and the boy was saved. St. Blase was ordered by the governor of Cappadocia to denounce his faith and sacrifice to pagan gods. He refused, and was brutally tortured and eventually beheaded for this offense. He is invoked against diseases of the throat.

St. Erasmus: A 4th-century bishop of Formia, St. Erasmus (also known as St. Elmo) faced persecution under the emperor Diocletian. According to legend, he fled to Mount Lebanon for a time to escape persecution, where he was fed by a raven. After he was discovered, he was arrested and imprisoned, but made multiple miraculous escapes with the help of an angel. At one point he was tortured by having part of his intestines pulled out by hot rods. Some accounts say he was miraculously healed of these wounds and died of natural causes, while others say that this was the cause of his martyrdom. St. Erasmus is invoked by those suffering from stomach pains and disorders, and by women in labor.

St. Pantaleon: Another 4th-century martyr persecuted under Diocletian, St. Pantaleon was the son of a rich pagan, but was instructed in Christianity by his mother and a priest. He worked as a physician to the emperor Maximinianus. According to legend, St. Pantaleon was denounced as a Christian to the emperor by his peers who were jealous of his rich inheritance. When he refused to worship false gods, St. Pantaleon was tortured and his murder was attempted by various methods – burning torches on his flesh, a bath of liquid lead, being thrown into the sea tied to a stone, and so on. Each time, he was rescued from death by Christ, who appeared in the form of a priest. St. Pantaleon was only successfully beheaded after he desired his own martyrdom. He is invoked as a patron saint of physicians and midwives.

St. Vitus: Also a 4th-century martyr persecuted by Diocletian, St. Vitus was the son of a senator in Sicily and became Christian under the influence of his nurse. According to legend, St. Vitus inspired many conversions and performed many miracles, which angered those who hated Christianity. St. Vitus, and his Christian nurse and her husband, were denounced to the emperor, who ordered them to be put to death when they refused to renounce their faith. Like St. Pantaleon, many attempts were made at killing them, including releasing them to lions in the Colosseum, but they were miraculously delivered each time. They were eventually put to death on the rack. St. Vitus is invoked against epilepsy, paralysis, and diseases of the nervous system.

St. Christopher: A 3rd-century martyr originally called Reprobus, he was the son of pagans and had originally pledged his service to a pagan king and to Satan. Eventually, the conversion of a king and the instruction of a monk led Reprobus to convert to Christianity, and he was called on to use his strength and muscles to help carry people across a raging stream where there was no bridge. Once he was carrying a child who announced himself as Christ, and declared the Reprobus would be called “Christopher” – or Christ-bearer. The encounter filled Christopher with missionary zeal, and he returned home to Turkey to convert nearly 50,000. Angered, the Emperor Decius had Christopher arrested, imprisoned and tortured. While he was delivered from many tortures, including being shot with arrows, Christopher was beheaded around the year 250. He is invoked against epilepsy and toothache, and is the patron of a holy death.

St. Denis: There are conflicting accounts of St. Denis, with some accounts claiming he was converted to Christianity in Athens by St. Paul, and then became the first Bishop of Paris sometime in the first century. Other accounts claim he was a Bishop of Paris but a martyr of the third century. What is known is that he was a zealous missionary who eventually came to France, where he was beheaded on Montmartre – the Mount of Martyrs – a place where many early Christians were killed for the faith. He is invoked against demonic attacks.

St. Cyriacus: Another 4th century martyr, St. Cyriacus, a deacon, was actually favored by the emperor Diocletian after he cured the emperor’s daughter in the name of Jesus, and then the friend of the emperor. According to the Catholicism.org and The Fourteen Holy Helpers, by Fr. Bonaventure Hammer, O.F.M., after Diocletian died, his successor, emperor Maximin, increased the persecution of Christians and imprisoned Cyriacus, who was tortured at the rack and beheaded for refusing to renounce Christianity. He is the patron of those who suffer from eye diseases.

St. Acacius: A fourth-century martyr under the emperor Galerius, St. Acacius was a captain in the Roman army when he heard a voice telling him to “Call on the help of the God of Christians,” according to tradition. He obeyed the voice and immediately sought baptism in the Christian faith. He zealously set about converting the soldiers of the army, but was soon denounced to the emperor, tortured, and sent before a tribunal for questioning, before which he again refused to denounce his faith. After many more tortures, from some of which he was miraculously healed, St. Acacius was beheaded in the year 311. He is the patron saint of those who suffer from headaches.

St. Eustace: Little is known about this second-century martyr, persecuted under the Emperor Trajan. According to tradition, Eustace was a general in the army who converted to Christianity after a vision of a Crucifix that appeared between the antlers of a deer while he was hunting. He converted his family to Christianity, and he and his wife were burned to death after refusing to participate in a pagan ceremony. He is invoked against fires.

St. Giles: One of the later Holy Helpers and the only one definitively known to not be a martyr, St. Giles became a seventh-century monk in the area of Athens, despite his birth to nobility. He eventually retreated to the wilderness to found a monastery under the rule of St. Benedict, and was renowned for his holiness and the miracles he performed. According to Catholicism.org, he also once counseled Charles Martel, grandfather of Charlemagne, to confess a sin that had been weighing on him. Giles died peacefully around the year of 712, and is invoked against crippling diseases.

St. Margaret of Antioch: Another fourth-century martyr persecuted by Diocletian, St. Margaret, like St. Vitus, converted to Christianity under the influence of her nurse, angering her father and causing him to disown her. A consecrated virigin, Margaret was tending flocks of sheep one day when a Roman spotted her and sought to make her his wife or concubine. When she refused, the Roman had Margaret brought before a court, where she was ordered to denounce her faith or die. She refused, and she was ordered to be burned and boiled alive, and miraculously she was spared from both. Eventually, she was beheaded. She is invoked as a patron of pregnant women and those suffering from kidney diseases.

St. Barbara: While little is known of this third-century martyr, St. Barbara is thought to have been the daughter of a rich and jealous man who sought to keep Barbara from the world. When she confessed to him that she had converted to Christianity, he denounced her and brought her before local authorities, who ordered that she be tortured and beheaded. According to legend, her own father did the beheading, for which he was struck by lightning shortly thereafter. St. Barbara is invoked against fires and lightning storms.

St. Catherine of Alexandria: A fourth-century martyr, St. Catherine was the daughter of the Queen of Egypt, and converted to Christianity after a vision of Christ and Mary. The Queen also converted to Christianity before her death. When Maximinus started persecuting Christians in Egypt, St. Catherine rebuked him and attempted to prove to him that his gods were false. After debating with the emperor’s best scholars, many of whom converted due to her arguments, Catherine was scourged, imprisoned, and eventually beheaded. She is the patron saint of philosophers and young students.

The article The Fourteen Holy Helpers: Plague Saints For A Time Of Coronavirus appeared first on Eurasia Review.